As a computer scientist and engineer, my knowledge of history, geography and anthropology is that of the average educated citizen : minimal.  I must also be modest concerning my expertise in onomastics. Six months ago, I had almost finished writing a piece of software and I had yet to discover that the name for it was onomastics. With so few credentials to speak for myself, I felt very honoured when Alice and Scott suggested that I write the “feature of the month” on onomastics.co.uk

After so much self-deprecation, now is the time to show the level of arrogance readers from the other side of the Channel will expect of a true Frenchman. What better way than setting immensely ambitious goals for this post? 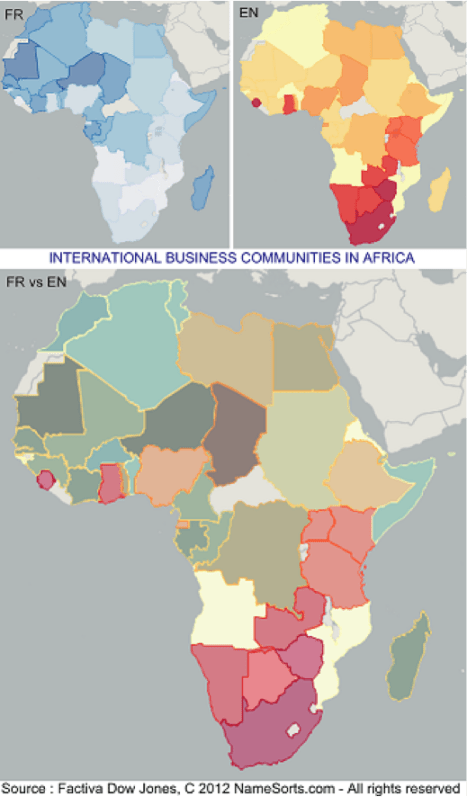 Firstly, to consider a entire continent: Africa. According to Wikipedia’s Geography page, there are 54 countries in Africa and I obtained data for 39 of them.

Secondly, to pick a very current subject: the global competition for Africa’s natural resources and the more positive and increasing interest of international investors towards Africa’s emerging economies.

Finally, to focus on meaningful actors: the company directors of the 5000 largest companies in each country. How many of these ~70k very important men (and occasionally women) have a French name or an English name?

Our method of name classification can be summarized as follow: if a company director were to become an Olympic athlete (after a bit of training of course), judging from his name only and the publicly available list of all ~150k Olympic athletes since 1896, would he most likely run for France or for Great-Britain ?

What does this map tell us? It visually confirms what the historian Fernand Braudel, in his book a Grammar of Civilizations, called the “linguistic joke played on Black Africa by the colonisation: instead of gaining one international common language, it got two”. It also tells us that this divide remains actual, affecting the way European and American companies do business in Africa now and in the foreseeable future.

Can onomastics be useful to monitor western Foreign Direct Investments (FDIs) in Africa? I believe so. As explained in an earlier post, European companies -for example- demonstrate little diversity at the top: Greek companies have Greek directors, etc. Large foreign subsidiaries will have expats on the Board of Directors, nominated by the head office, most likely of the same nationality. There are limitations to this approach, of course: the accuracy of name classification itself (normally within a 75%-95% range). Also, investments from the USA, still the world leading economic power and a “melting pot“, are difficult to distinguish from other sources of investments using onomastics only. But it would probably work well to monitor -for example- Japanese, Russian or Chinese investments in Africa.

London-based fDi Markets (of the Financial Times) is the leading database on cross border investments. Focused on developing countries, the United Nations Conference on Trade and Development (UNCTAD) provides is own statistics. UNCTAD data was used to build the heat map China Foreign Direct Investment in Africa (2005) illustrating Sherpa’s 2011 post “China in Africa: South Africa Joins BRICs Summit“.  If I could put my hands on a revised version of this map, I would be curious to compare it with an onomastics view and that would make a great material for a later post. Email me at : Elian.Carsenat@nomtri.fr