This month, starting 25th of August, the University of Glasgow will host the 25th International Congress of Onomastic Sciences, the premier conference in the field of name studies.

For this occasion, we have started to calibrate NamSor software to recognize Scottish names. This is work in progress, but I’d like to share some preliminary data visualizations of regional names.

2014 marks 100 years since the start of the First World War. All across Europe and beyond, families lost dear ones, children were raised without knowing their father and grand-children were born in the aftermath of this trauma – only to live another global war, WWII. Let’s respect the people who died in both wars, and let’s also listen to the message their names convey to us about who they were, about who we are.

What do personal names tell us about the world in 1914?

In 1914, Europe was composed of Nations and Nations of Regions with deeply rooted people. This was the situation before the massive rural exodus and before the international migration flows caused by either decolonization or what we call today ‘globalization’. This first global war was fought by local people who lived close by among themselves, married in their local community, often spoke their own local language…

We’ve analysed the Commonwealth War Grave Commission (CWGC) database to see if we could correlate onomastics and regiments. The result is presented below:

The onomastic mille-feuille is dense but hard to understand. You can think of it as a sorted list of pie charts, like this one: 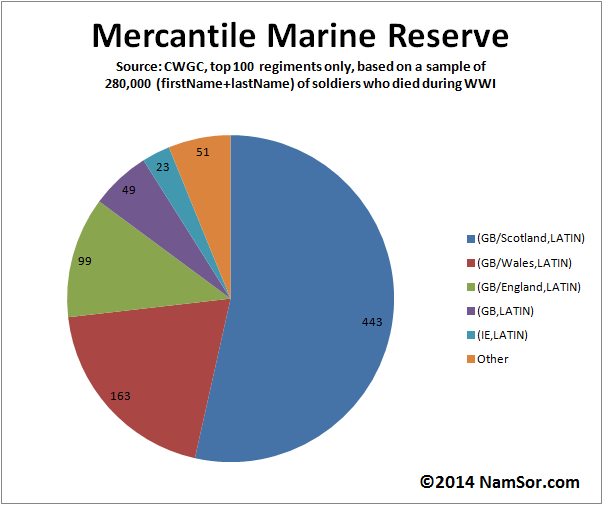 This pie chart tells us that the Mercantile Marine Reserve was composed mostly of Scottish and Welsh soldiers.

By looking at the soldiers ranks for that particular regiment, we can produce a new onomastic mille-feuille: names DO matter when it comes to rank in 1914.

In more easily understandable pie chart language, this means that the Firemen were mostly Scottish and Welsh, whereas the Carpenters were English.

The First World War started as a European war but populations from Africa and Asia were immediately mobilized by the colonial powers of the time: the British Colonial Empire,  France, … many soldiers came from far away to meet their death in the tranchées of Eastern France.

The Indian names in CWGC are indicated without any given name, but with the son’s and father’s name, for example:

So we have used a different algorithm to automatically cluster Indian names into onomastic classes. Some onomastic classes might be related to geography, some to Indian castes, social or religious beliefs …

We can again use an onomastic mille-feuille to visualize the correlation between names and geography, but here a classic geographical map would probably tell a better story.

Distinctive patterns are recognized in names from Bombay, Madras, Delhi or Pashawar, allowing the software to cluster them into distinct onomastic classes.

And again we can then look at regiments to how ethnically/linguistically diverse they were:

The equivalent of CWGC in France is the Mémoire des Hommes database. We’ve used it to calibrate NamSor recognition of French regional names. After calibration, about 70% of names can be allocated to a particular region and we can produce the following onomastic mille-feuille, sorted according to the relative number of Bretons (people from Brittany):

We can also view the total number of casualties, broken down according to the onomastic class. It shows the large number of people originally from Brittany who died during WWI, regardless of their birthplace. However, this remains debatable as ~30% of names could not be specifically allocated to a region of origin (only recognized as French). 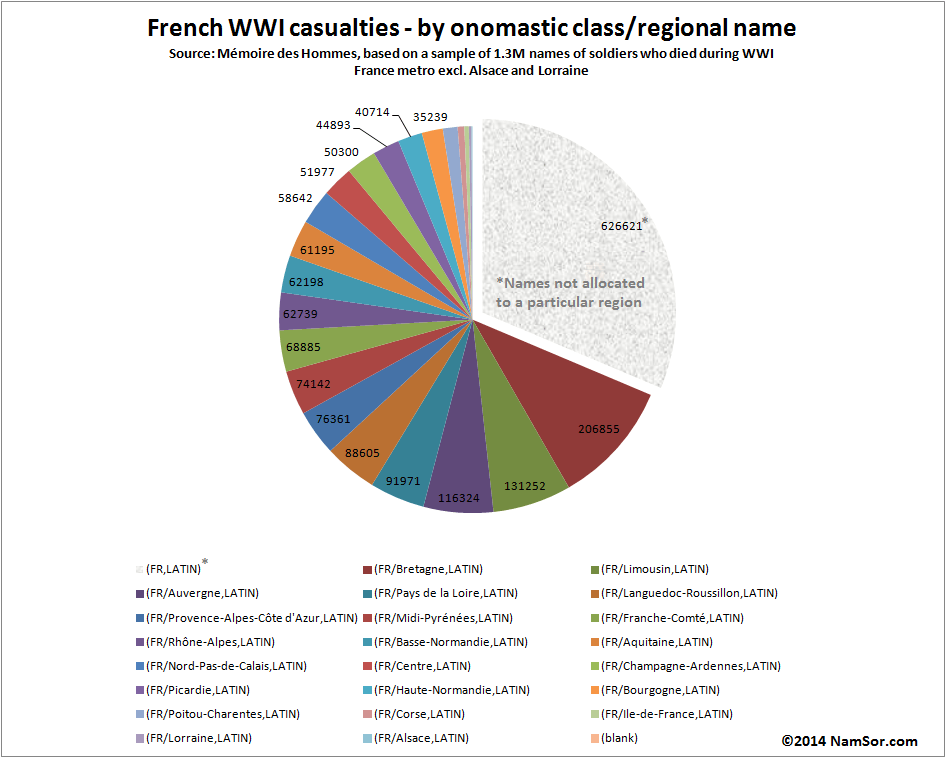 Baptiste COULMONT, a sociologist, published a very interesting study on given names analysing the results of students at the French Baccalaureate in 2014. We’ve used a similar dataset to compare regional names in 1914 and in 2014. Unfortunately, we didn’t have enough time to align the geographic mappings – but the result is visual and self-explanatory. We can see how rural exodus and internal migration have eroded the regional identity in personal names. Still we can see that even in 2014, the correlation between onomastics and geography remains strong – especially in Brittany, in the North of France, in Alsace, in Lorraine, in Loire, in Lyon, in Aquitaine and Corsica. 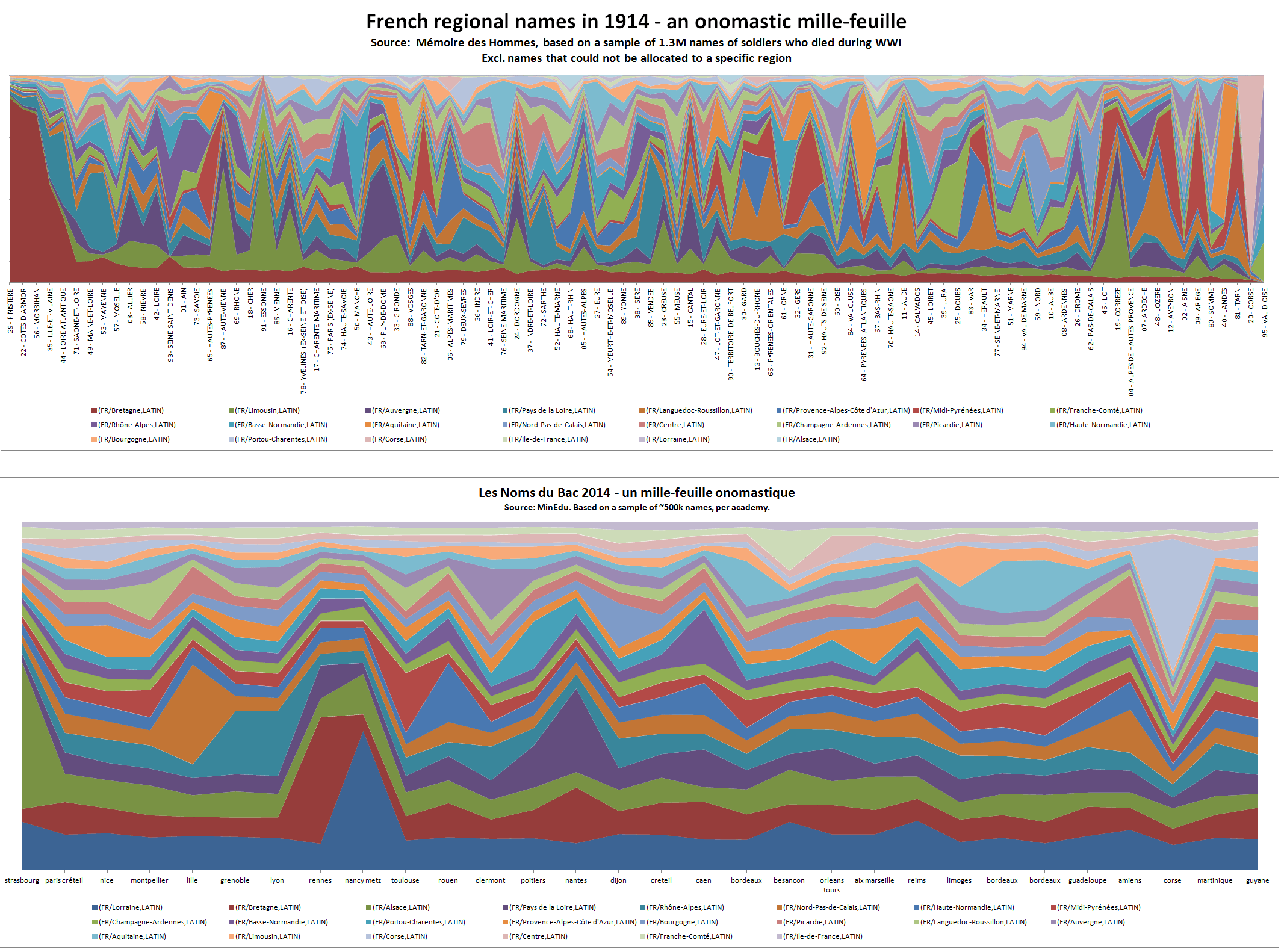 Enough to make ICOS2014 a very exciting and current event. We look forward to be in Glasgow on 25th August and meet you there. Long live onomastics.co.uk

NamSor™ Applied Onomastics is a European designer of name recognition software. Our mission is to help make sense of the Big Data and understand international flows of money, ideas and people.
http://namsor.com/