The ‘Diasporas Programme’, or, to give it its full title, ‘The Impact of Diasporas on the Making of Britain: evidence, memories, inventions’, is a five-year multidisciplinary research project funded by The Leverhulme Trust and running at the Universities of Leicester and Nottingham.  The project team consists of five post-doctoral researchers, seven academics at Leicester and Nottingham who act as advisers to the post-doctoral team and conduct related research, and three PhD students.  The team’s members are working on very diverse topics including computational modelling of historic migrations and their genetic legacy, metalwork in seventh-century Mercia, language in early Anglo-Saxon England, and the significance of historic immigrations in shaping contemporary identities.  You can find out much more about the Diasporas projects and the people involved by heading to the project website and you can keep up-to-date with the project’s news via the  Facebook page.

As an example of how the various Diasporas projects fit together, I’ll outline what I’m investigating for my PhD and how it fits into the wider project.  My project, one of two Diasporas projects investigating ‘Dialect in Diaspora’, focusses on minor names (the names of fields and landscape features) recorded in the later medieval period.  I have selected a method allowing me to assess the relative proportions of English and Scandinavian vocabulary used in the names and which then allows the relative levels of Scandinavian linguistic influence to be compared in different areas.  So far, I’ve looked at the Wirral in the historic county of Cheshire, where there is a wealth of other evidence for Scandinavian settlement including several Scandinavian major place-names and typically Anglo-Scandinavian sculpture, and an area of the historic county of Westmorland.  Amongst the medieval minor names from the Wirral, Scandinavian vocabulary accounts for approximately one-fifth of the vocabulary that is either English or Scandinavian in origin.  In contrast, in the area of Westmorland I looked at, the proportions of Scandinavian and English vocabulary are roughly equal.

These findings can be compared with those of a couple of other project members, Turi King, who is investigating how surname-informed genetic sampling can be used to investigate historic migrations in the British Isles, and Mark Jobling, one of the co-investigators.  Turi and Mark worked on a study investigating Norwegian male ancestry amongst the medieval population of the Wirral, which found this to be approximately 50 % (Bowden et al., 2008).  Bearing in mind the relatively low Scandinavian contribution to the vocabulary of the Wirral’s medieval minor names, this suggests that the number of Scandinavian immigrants can’t be the sole factor in determining whether (or not) Scandinavians had a significant impact on local dialects.  The study which Turi and Mark worked on was carried out before the project began but is now being followed up with similar studies by Turi in a number of different areas in the UK and Ireland as part of her research project ‘Surnames and the Y Chromosome’, which is investigating what surname-based sampling can reveal about historic male migrations.  I am looking forward to finding out what she’s discovered elsewhere.

One of the ways in which the Project team actively encourages interdisciplinary co-operation is by housing the postdoctoral research assistants in the same offices and through a series of fortnightly lunchtime meetings in which we get together and discuss research in the project members’ research areas.  In the first year of the project, the project team held a series of workshops introducing our various fields to each other, complemented by a handful of team visits to locations including the British Museum and the Staffordshire Hoard exhibition in Stoke.  So, for instance, Turi gave us an introduction to the structure of the human genome and the chromosomes that constitute it, and how she uses DNA mutations as part of her research.  Another week, Marc introduced the rest of us to discourse analysis.  These sessions played a vital part in equipping the team with the knowledge necessary to understand what each of the other team members is researching and to assess research from outside our main research areas. 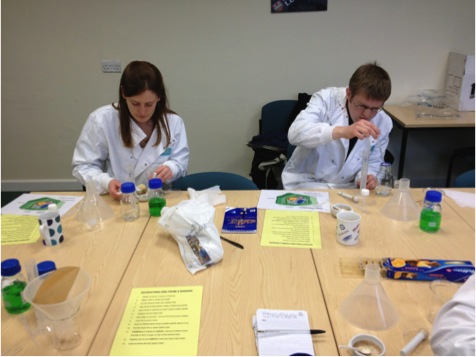 Ellie and Marc extracting DNA from a banana

The basics we’d acquired through these introductory sessions were fundamental building-blocks for the next series of interdisciplinary meetings, the fortnightly ‘Journal Club’ meetings in which we read and discuss an article that is relevant to the project’s research aims.  As an example of how this works, I’ll outline what I’ve learned from our discussions of a number of articles considering genetic evidence for the arrival of the Anglo-Saxons and how this should be interpreted.  We discussed various reactions to a paper by Weale et al. (2002) estimating Anglo-Saxon male ancestry to be between 50 and 100 per cent in central England.  For example, we discussed the findings of Thomas et al. (2006), who posited that these high levels of non-native ancestry could instead be explained by lower levels of migration — perhaps as low as 10 % — combined with the existence of an ‘apartheid-like structure’ in early Anglo-Saxon England (i.e. a period of relative genetic isolation between the Anglo-Saxons and the native population during which the higher economic and social status of the incoming Anglo-Saxons gave them a reproductive advantage).  On a related note, we also read a paper by Fenner (2005) discussing what average generation gap (i.e. the mean age of all births) the geneticists should use when modelling historic migrations.  Fenner noted that most genetic studies tended to use a generation interval of 20–25 years; however, his survey of modern generation intervals (including consideration of recent hunter-gatherer societies) found that male and female mean generation intervals were not equal and that the generation intervals that have been widely used look a little on the low side (he estimated mean generation intervals for recent hunter-gatherer societies to be  25.6 years for women and 31.5 years for men).   Whilst we can’t claim to have reached any definitive answers for these issues, or indeed other thorny issues like how the size of the population of post-Roman Britain might be calculated, the non-geneticists on the team are all now both aware of the issues the geneticists on the team grapple with and better–equipped to assess genetic claims critically.

So what has my experience of working on a multidisciplinary project as part of my PhD been?  Well, I’ve had superb opportunities to benefit from discussions with researchers working in fields that are very different from – but highly relevant – to my own, and it’s been a lot of fun too! 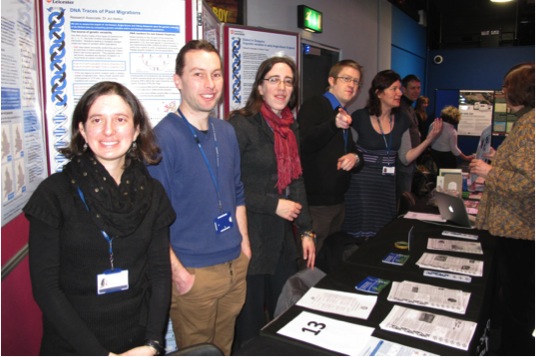 Bowden et al.  2008.  ‘Excavating Past Population Structures by Surname-Based Sampling: The Genetic Legacy of the Vikings in Northwest England’, Molecular Biology and Evolution, 25 (2): 301–09